Looking at Baggypuss today, you’d never believe he was once a starving stray who was shoved away from a bus wait while looking for leftovers. 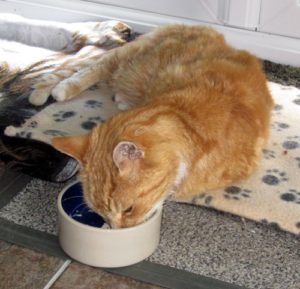 Six months ago, things were drastically different. The skeletal cat was forced to eat leftover scraps because it was scared, hungry, and dehydrated. He tried to board a bus in Halfway, Isle of Sheppey, in quest of food but was pushed away by the passengers.

Fortunately for Baggypuss, he was discovered and taken home by a local resident, who subsequently phoned Swale CP and took him to the vet.

The next day, Swale’s Branch Co-ordinator Sylvia Foster paid a visit to the cat at the clinic. “His back legs could barely support him since he was so feeble.” She describes his fur as rough and tufty, and his eyes as sunken.

“I carefully lifted him up, and he nestled into me and began purring. ‘You poor mite, I’ve got to do something for you,” I thought. 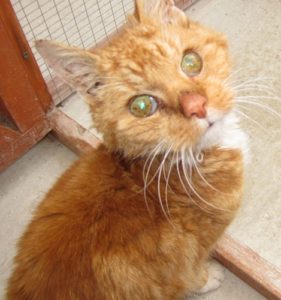 Sylvia assumed the cat had a variety of medical issues, but tests revealed that he only had an overactive thyroid that could be managed with medicine.

Baggypuss was transported to his new temporary home, a cozy Cat Cabin at Branch Fosterer Val Hadnutt’s house. Baggypuss steadily improved under Val’s care and dedication, gaining more than half a kg in weight. 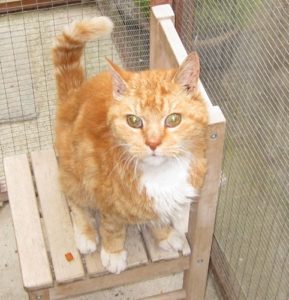 Then, at long last, he found a new owner.

Vivienne Husband first saw Baggypuss at Val’s house at a branch open day. “He walked into my heart and that was it; I needed him right away,” Vivienne explains.

Baggypuss and Vivienne moved into their new home in early July. In her care, he has blossomed and is at a healthy weight.

“He appears perfectly content to me when he’s sleeping, all snuggled up,” she adds.