It’s becoming increasingly frequent in today’s world for children to set wonderful examples of empathy and work ethic by providing food for animals in need. We were thrilled to discover about 12-year-old Darius Brown, who hand-makes bows and bow ties to help get shelter dogs adopted earlier this year.

Brown isn’t the only youngster on the street who is doing something amazing for the sake of animals in need. 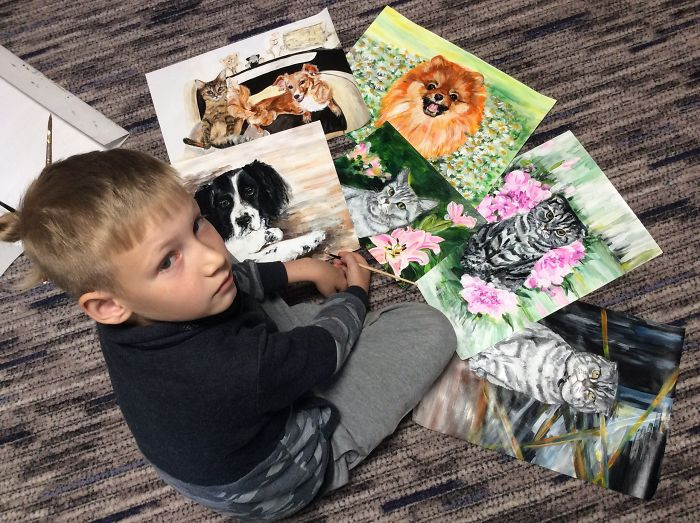 Pavel Abramov, a 9-year-old Russian boy, has been making amazing works of art and exchanging them for food and supplies that he contributes to a local animal sanctuary in Arzamas, Nizhny Novgorod. Pavel’s paintings are great in and of themselves, but he’s also doing something inspiring with his skill that is completely unselfish. 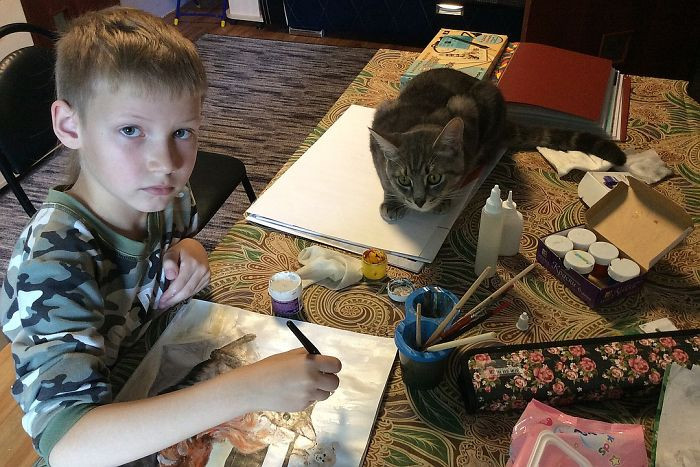 Pavel started a project called “Kind paintbrush” with his mother Ekaterina Bolshakova around a year ago. 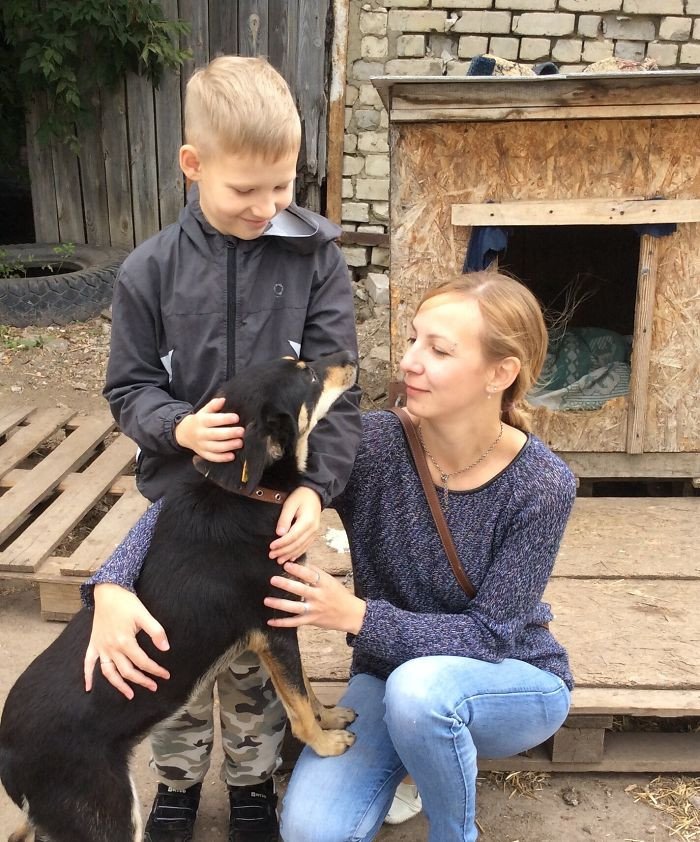 Of course, all great ideas have inspiring origin tales, and Pavel’s is no exception. Pavel could no longer bear the thought of stray animals roaming the streets of his village when one of his own four-legged family members passed. 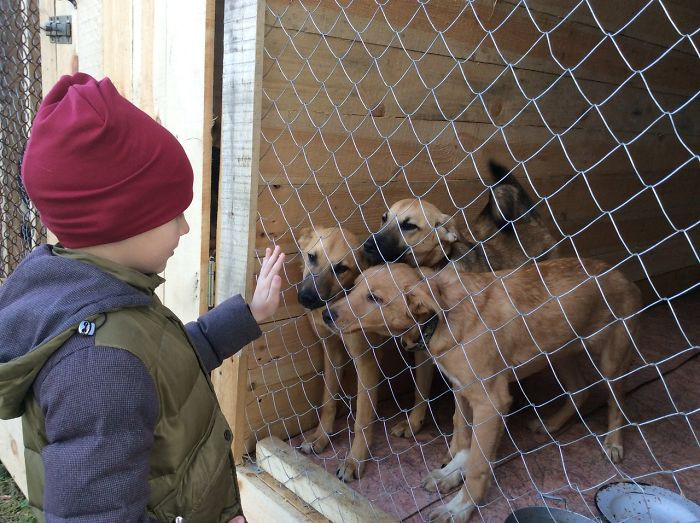 He determined to be a part of positive change in remembrance of Barsik, his family’s cherished pet. 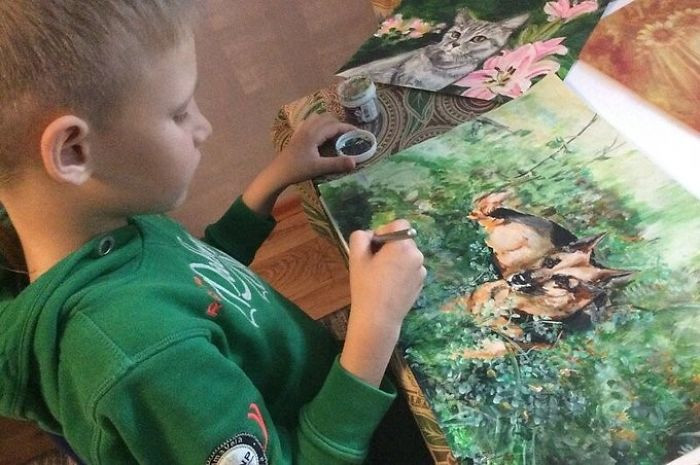 Pavel and his mother joined the VK group “What a small volunteer is capable of?” on the Russian social networking website.

The organization has served as a springboard for many young Russians looking to make a difference, and Pavel has had a significant impact. 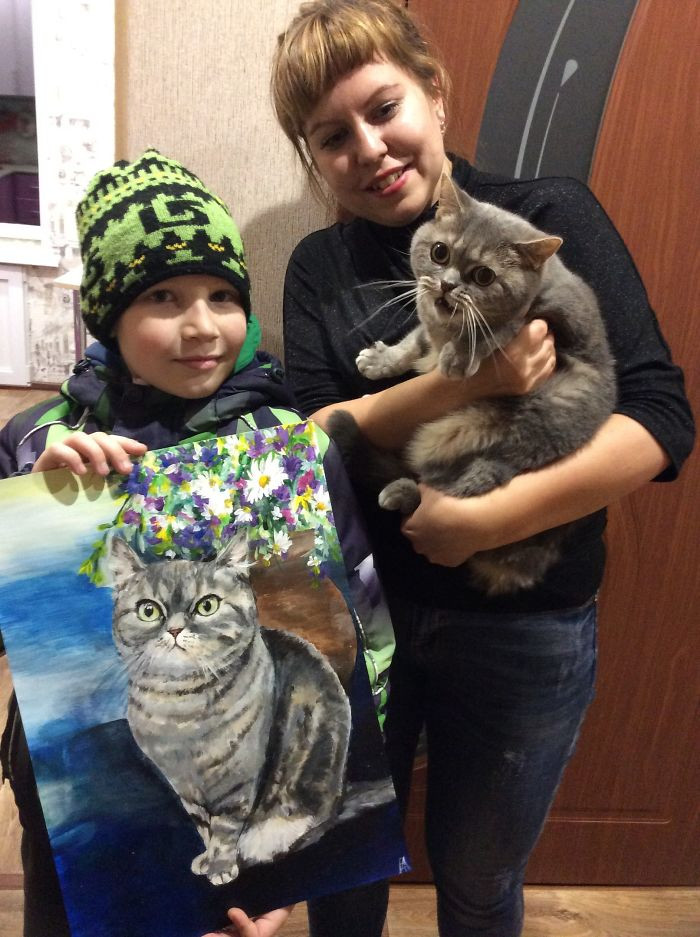 Pavel doesn’t have much money or the backing of any organizations. He is simply an artist who creates art and uses his talent to create something extraordinary. 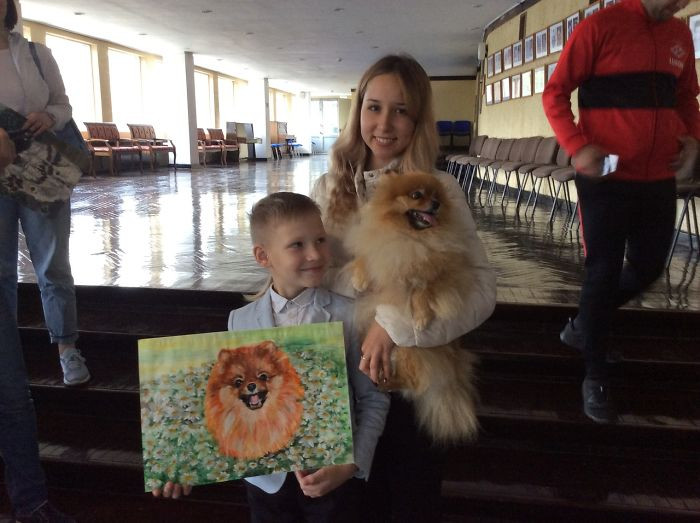 Pavel paints a portrait of a client’s favorite pet in exchange for “kilograms of porridge, meat, and supplies” signed by the client. 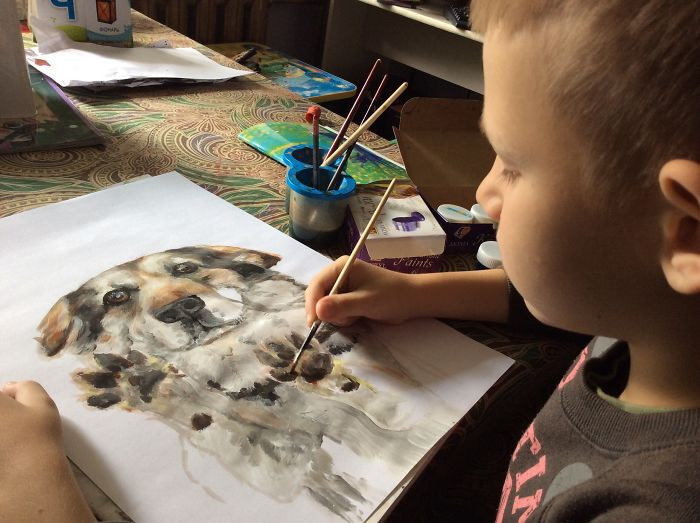 Families submit images of their pets and anecdotes about how they met, and Pavel draws inspiration from the photos and stories. 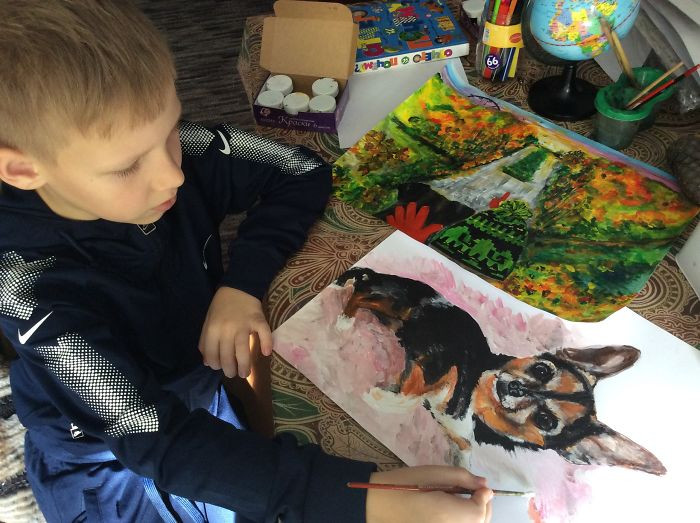 Pavel frequently meets the families and the animal friend after the paintings are completed, and he remembers their names. 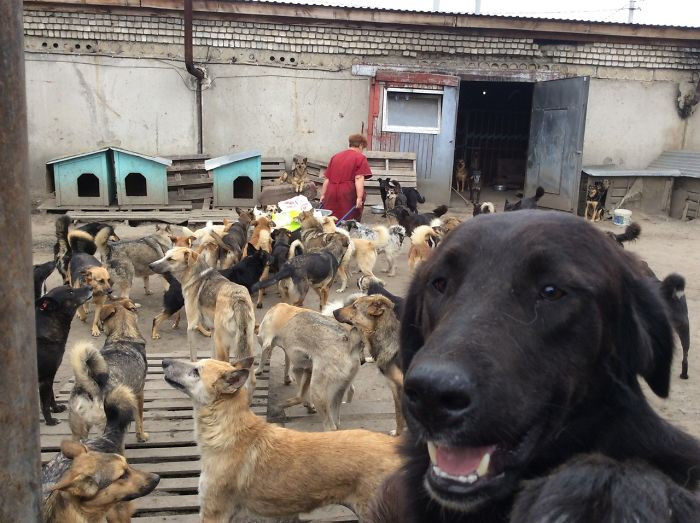 Hearing about the pets he draws and where they came from inspires the young artist, as many of them were saved from the streets. It is a constant source of inspiration for him.

Even better, Pavel’s efforts have been recognized.
His portrait work was initially solely sought in the Arzamas City community, but because of the nature of social media, as well as his talent and heartwarming objectives, people from all over Russia have sought out his work. 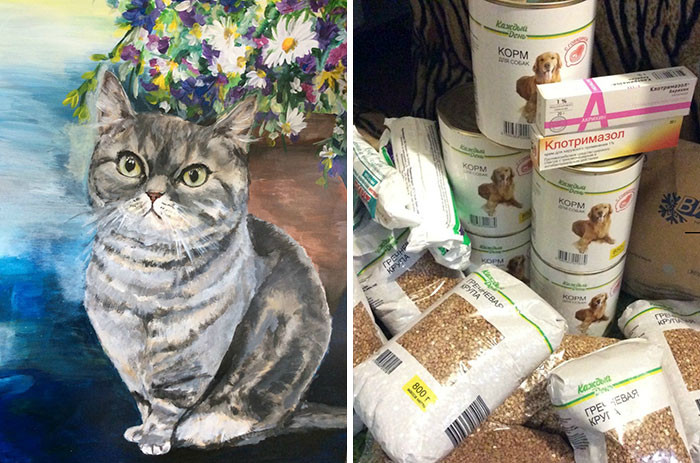 Even more, his expertise is now being sought altogether outside of Russia!
Pavel’s paintings have traveled to Spain and Germany, and he is far from finished with his brush in the near future.

Pavel’s hometown of Arzamas has only one animal shelter, and he is currently the youngest volunteer.

He volunteers at a shelter that has over 100 dogs!

As a result, Pavel offers his paintings in exchange for the shelter’s and its canines’ numerous requirements. Everything from household items to pet accessories to food and treats is traded.

In exchange for original artwork of their pets, people have brought medicine, collars, leashes, canned food, kibble food, and even toys.

Pavel painted this painting of Oynx in exchange for 3 kg of canned dog food, 2.5 kg of oats, 4 kg of pearl barley, dog treats, and housekeeping items given by his owner.

This family, on the other hand, donated 15 kg of selected beef specialties to the shelter. 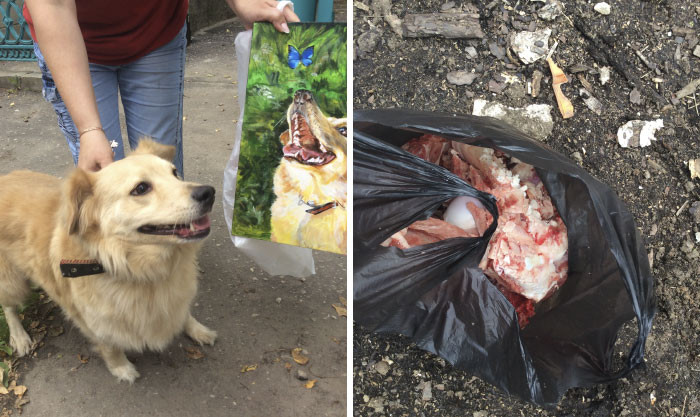 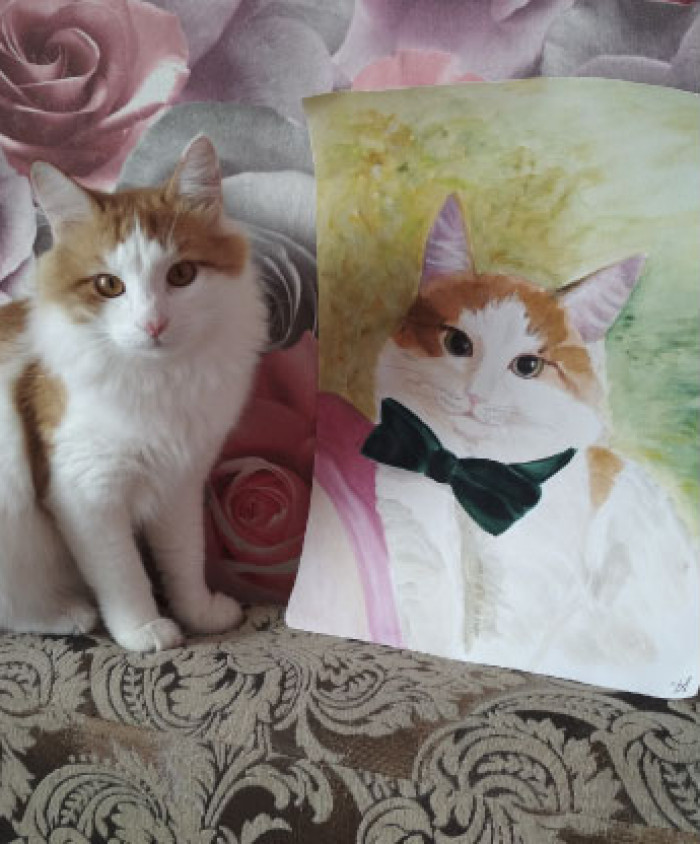 This family arrived with ten kilograms of meat bones! 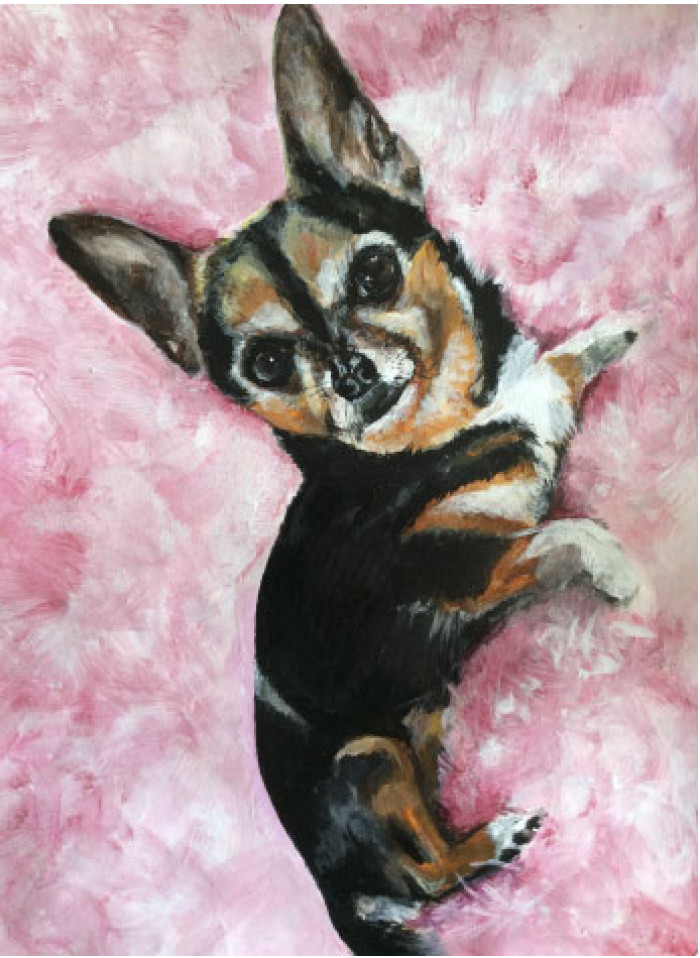 Isn’t it amazing what a dedicated little guy can accomplish for his community and animals in need?

His intricate paintings are really successful.

Pavel’s mother, Ekatarina, remarked in an interview with Bored Panda:

Our family is really pleased of his fantastic project. His days are planned down to the minute; he wants to do everything, but there is simply not enough time.